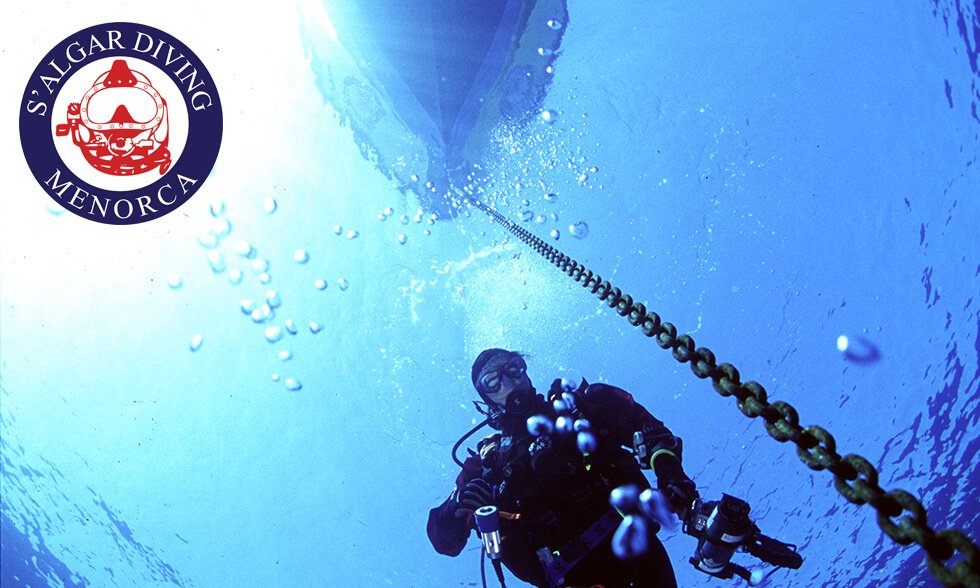 From S´Algar to Biniancolla, with the little island “Isla del Aire¨ on our doorstep, we can offer over 15 different divesites in the middle of the Marine Reserve. Even our “own” bay, our house reef so to speak is inside the protected area.

Diving in Menorca might be classed as a somewhat culinary experience, as Menorca underwater is a bit of a Swiss Cheese.

Plenty of caverns, caves, tunnels as well as small crevices for all sorts of critters to hide in, can be found on every dive. In and around S´Algar, we have around 20 different dive sites on offer, all within a short boat ride from the centre.

Most of our dive sites are accessible to all levels. The best depth usually being between 10– 25m, beginners and experienced divers alike will find places to explore at any depth.

While diving in Menorca, you´ll have plenty to see, and if you take your time and look a little bit closer, you will find a lot of life in the form of Nudibranchs, Crabs, and other Crustaceans.

As a little side-note, it is always advisable to take a torch with you when diving in Menorca. Cracks and crannies are everywhere and without a torch, you might miss out on a lot of little stuff.

If you are more of a wide-angle – take it all in on a bigger scale – kind of diver, you will enjoy the topography under water. Huge rocks randomly placed next to or on top of each other make for interesting swim-throughs, elsewhere you will find the contrast of sunlight mesmerizing, as it is finding its way through openings in a wall or cavern. Visibility usually ranges from good to very good to excellent and allows you to see and appreciate the dive site. As well, it is kind of nice when you can see where you are headed and it allows you to see and communicate with your dive buddy. Hence, you can leave your buddy line at home. Same goes for the reef hook. Strong currents are not something we´ll find very often.

The dive sites we frequent on a daily basis and are easily accessible on our boats within 10 – 20 minutes, stretch from the harbour of Mahon to the East up to the Caves in Cap den Font to the West, with the Isla del Aire to the south from S ´Algar.

Our main dive boat ¨While you´re down There¨ will take us anywhere within 20 mins max. The only exception being the Caves of Cap den Font, where we tend to take our RIB ¨Boris¨ for a speedy ¨  🙂 return.

The following dive sites are great for all levels.

For divers of a certain experience, liking caves and caverns and having no buoyancy issues.

Our 2 ¨ house wrecks¨ are restricted to divers with a certain experience and qualification level. Both sit on 47m. Hence, we dedicate their own site to them. Santa Clara and Junkers88.

Other Items of Interest